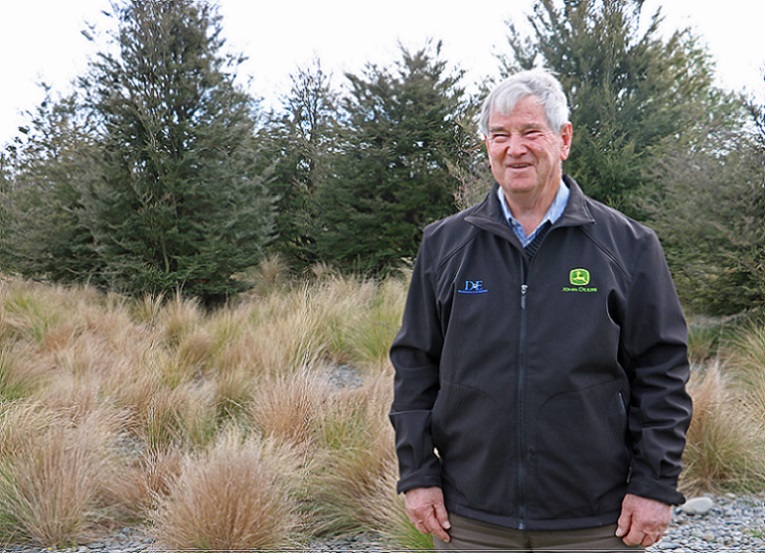 For Graeme Oakley his roots in Halkett, near West Melton, go back almost 150 years.

“Where we live now is where my great grandfather moved in 1873, but he only had 20 acres. In addition to the title he ended up being foreman of the work on the Waimakariri, building stop banks and groynes. My father moved to Hororata in 1934, that’s where I was as a small child and a teenager. The farm in Halkett expanded and I bought it in 1962 and have been there ever since.”

The move back to Halkett came in the same year as he married wife Dorothy, from Glentunnel, and the pair raised five children on the farm. Although the community in Halkett was a close community Graeme says it is a friendly one and the family was quickly accepted.

Over the years, he mainly farmed potatoes, followed by his youngest son Robin, who set up his own potato farming business to become the largest fresh produce producer in the district.

Dorothy, who died eight years ago, received a Queen’s Service Medal for her many and varied local and national leadership roles. She led the establishment of the Canterbury Rural Support Trust, which she chaired for 25 years, and was active in Rural Women of New Zealand (then the Women’s Division Federated Farmers) serving as national vice-president for six years. She was a Girl Guides leader for 10 years, on the Parent Teacher Association at Halkett School, the West Melton Resident’s Association, Malvern Community Board, Selwyn Central Area board, and set up a health care group for the area which is still active.

Dorothy and Graeme shared a love of scouts with Dorothy receiving a Medal of Merit from scouts for her role. All their boys achieved their Queen’s Scouts award. Today, Graeme is joint patron of the West Melton scouts with long-time friend Colin Watson.

The couple enjoyed tramping, canoeing and shooting as part of the West Melton shooting club. Graeme was a South Island team member for 50 meter outdoor target shooting from 1975-79 and New Zealand team manager at the Oceania Small bore Rifle Target shooting team in 1980 and 1984.

“It’s been a family thing. My father is the only person who has ever been both New Zealand and Australian Full Bore Rifle champion, that was in 1949.”

They also enjoyed cycling, which has become a passion for Graeme that has taken him round the world travelling thousands of kilometres on international cycle tours.

“It’s taken me some interesting places; Madagascar, Iceland, Norway, I did the 2000 Tour de France route in 2014, cycled in the Andes, and in Bhutan earlier this year. I did 3500 kilometres through Czech Republic, Austria, Italy, Greece, Turkey and then from Germany to Hungary last year. I’m going to Japan next month, doing two tours.”

However, while the cycle tours have taken him far from Selwyn, Graeme says he’s not ready to leave Halkett just yet. “I like it as an area. I’m an hour to the beach, an hour to Porters Pass and the mountains, Lake Coleridge and if I want to go to a movie I can be home from town in half an hour. It’s been a good place to be.”