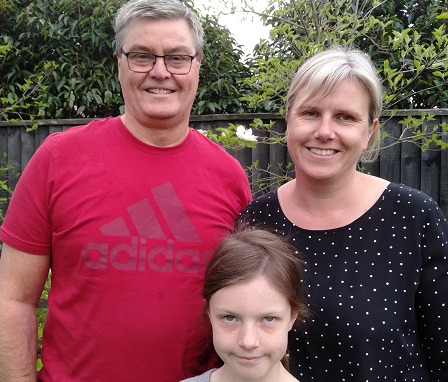 Moving into their first home together, Craig and Kelly never thought they would leave it. Then the 2011 Christchurch earthquake hit.

After the February earthquake, their house was red zoned and they were forced to leave. The couple had to make a quick decision about where they were going to move.“I think the worse thing was not knowing where we were going.” Kelly says.

“You went to bed each night thinking, where am I going to be living in the next six months?” Craig adds.

Craig and Kelly began looking for a house in town but with no luck. They decided to look at the option of building and Kelly’s brother, who had done some plumbing in Rolleston, suggested they look there. They found a section they liked early the following year and moved in 10 months later.

Before buying the land, Craig had never been out to Rolleston and says they would not have built a house either.
“We quite like older houses, we weren’t specifically looking for a new house.”

But seven years later, Craig, Kelly and their nine-year old daughter Vienna enjoy living in Rolleston. They feel very fortunate to have privacy, peace and quiet, yet be close to Vienna’s school, shops and a park to walk the dog.

“You look out and you don’t feel like you’re in the city.” Craig says.

Being away from Christchurch made it easier to forget about the earthquake and there was well needed peace and quiet from it. Before moving to Rolleston, Avondale was like a ghost town with residents leaving their houses behind. Being one of the last families to leave the area, the couple recall walking around feeling vulnerable.

“It was horrible when you were living there and you were walking the dog around the block and you’d see broken windows and empty houses and it became quite eerie.”

Now when Kelly and Craig walk the dog in Rolleston, they have a sense of safety.

Craig and Kelly were not alone in moving out to Selwyn, after the earthquake the district grew in population by 47 percent led by people moving from Christchurch.

The family likes to participate in park runs at Foster Park on Saturdays, camp out at Glentunnel and drive out to Darfield for the forest walks and the bakery. Kelly volunteers for Bellyful Selwyn, delivering meals around Selwyn to new mothers and families with unwell children, while Craig has fun biking around the district.

Craig admits the earthquake is the reason his family moved, but they would not be rushing back into town now, except for a beach trip or to his favourite record store, Penny Lane.