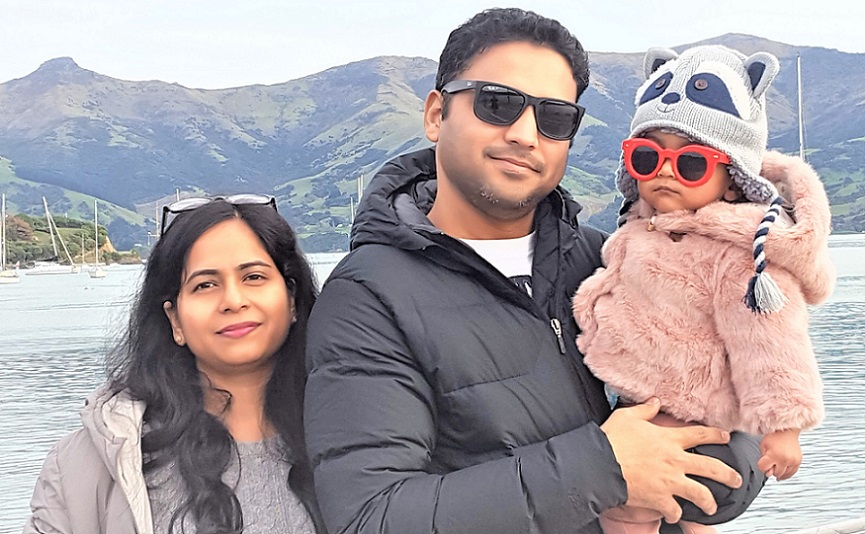 Sheetal Sharma always loved everything about New Zealand. She worked as an education consultant in India promoting study options in New Zealand until she convinced herself and her husband to study there too.

“I started talking about it to my husband, saying why don’t you go study in New Zealand. He was planning for higher studies in the US, but I convinced him to come to New Zealand because of the Kiwi lifestyle and friendly people. ”

The more the couple researched about New Zealand the more they fell in love with the place.

The pair started their journey in Invercargill in 2012 and they worked in Wellington and Auckland. They moved to Christchurch when her husband, Abhineeth, found a job at Ara Polytechnic Christchurch.

Arriving in Christchurch in 2017, Sheetal was pregnant with her first child and they went searching for their first family home. After a visit to friends who had built in Rolleston the couple decided Rolleston was the place to be.

Fortunately, the property next door was for sale and the family snatched it up for its nice view of a duck pond and handy location near a bus stop.

“Once we saw the property we just fell in love with the environment and the vibes, it was so positive. The neighbourhood was really friendly and my friend was living just next door,” says Sheetal.

She remembers a local driver stopped to offer her a lift home from the bus stop one day in the hail.

“I was just a stranger to her, but she just made sure she dropped me home because it was hailing. It was just a nice gesture and things like that make you realise such good people still live in this world.”

Sheetal works full time with international students at Lincoln University, helping them to settle into the new country and supporting their academic needs.

“I understand the challenges of new migrants and I really like to help them.  It doesn’t matter if they come from India, China or any other country; I feel that they have the same challenges in settling in, the language barrier or the cultural shock, or homesickness – which is why I took up this job.”

New Zealand life is very different to Sheetal’s life in India. Growing up in Hyderabad, in southern India, she lived with her extended family and her husband under the same roof and had lots of domestic help that took care of needs around the house.

She discovered that listening, reading and watching the news helped her to adapt to life in New Zealand.

By attending many cultural activities, visiting the temple for prayers and cooking biryani rice Sheetal stays connected to her culture.

She spends most of her free time with her three-year-old daughter Arnika who loves feeding the ducks at the pond.