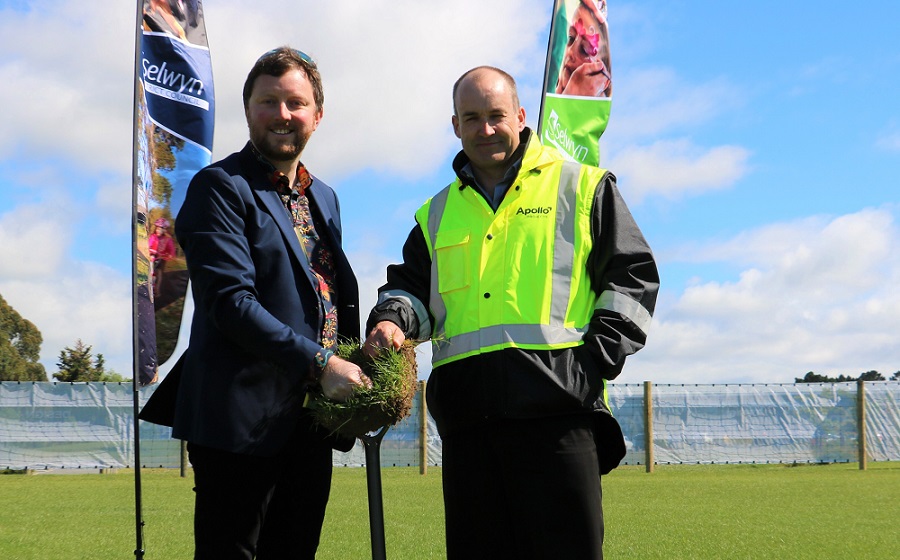 Work has officially begun on the building of the Foster Park indoor courts complex with a ground breaking ceremony this morning.

The ceremony marked the halfway point in a journey to get the eight court facility built, Mayor Sam Broughton said.

“Three years ago the Council committed to build some significant social infrastructure that the community had been asking for, including the indoor courts. It’s exciting to be at this point of providing an excellent sports facility along with the other developments we’ve made at this park for the District.”

He thanked contractors Apollo Projects for their innovative design and construction approach. It was a source of pride for the Council that the design allowed the courts to be built with significantly more floor space and at a cheaper cost to similar new or soon to be built facilities, he said.

“To work with Apollo has been really good. For you to deliver everything we needed and those things that we wanted matters to us.”

Apollo Projects Senior Projects Manager Steve Bailey said the team had been hard at work since March when it began work on a tender to build the courts.

“It is a great pleasure to start the physical works of this project. It has been some eight months of full time investment to get us to where we are today and we look forward to partnering with Council over the next 18 months to deliver this project.”

The $21.5 million building is expected to be ready for use by the winter sport season 2021 and will assist meeting a growing need for indoor sports facilities within the rapidly increasing population in Selwyn.

Four of the courts will be built with a sprung wooden floor, while the other half of the building will feature a multi-purpose floor which will be able to host a wide range of events and functions.