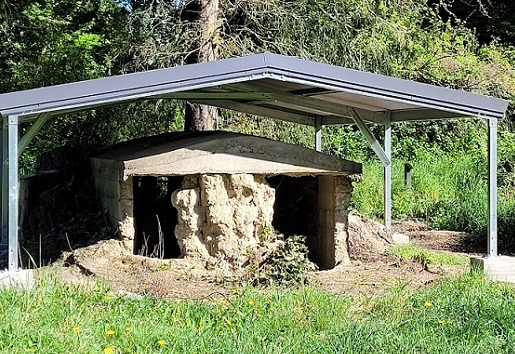 When TW Adams began planting trees at Greendale in the mid-1800s, he wanted to provide shelter on the windswept Canterbury Plains, now a new installation is sheltering his 160-year-old sod cottage.

The Greendale Community Trust has finished building a canopy to protect the cottage Alfred Albert Thomas William (known as TW) Adams built at his arboretum in 1865 – part of the trusts’ work to restore the historically significant arboretum.

Trust Secretary Ruth Warren says she’s delighted with how the neglected site has been transformed.
“When we began working on the arboretum in 2016, it was completely overgrown and inaccessible. After TW died in 1919, there had been no funds to maintain it. Now it is open for people to enjoy and learn about its history.”

Adams - an international authority on forestry - settled in Greendale in 1862 and started an arboretum growing 800 tree species
and 500 fruit tree varieties. Some are now the only ones of their kind in Aotearoa, and several are extinct or endangered in their countries of origin.

To make a home, Adams dug down into the ground and used the earth to build his cottage. The cottage’s protective shelter was made possible thanks to volunteers from the Trust and community, as well as a $4,000 heritage grant from Selwyn District Council. The grant will open again for applications in June 2023.

“It’s been a great project, and I’d like to thank all the people who’ve donated their time and skills to preserve our history,” Ruth says.