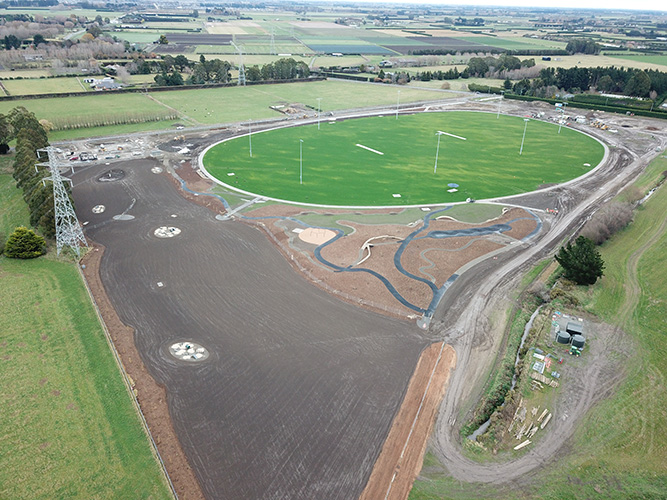 Floodlit sports fields, a new dog park and walking and cycling paths are expected to be open later this year as part of the new reserve in the Springs ward.

Construction of the first stage of the reserve on Birchs Road is now mostly complete, and facilities will open to the public in November, after grass areas have had time to grow over winter.

This reserve is a $17.2 million, three-stage project to develop a 22 hectare park within the Springs ward, providing recreation space for a rapidly growing part of the district, says Phil Millar, Major Projects Property Manager.

“The reserve will be a huge asset for the Springs community and the wider district,” he says. “It will add much needed space for both active and passive recreation, easily accessible to both the Lincoln and Prebbleton communities.

“We’ve worked with local residents over recent years to gather input into the design of the park – and we’re confident there will be facilities and spaces here for the whole community to enjoy.”

The first stage will include three full-size and one half-size lit playing fields, wide walking and cycling paths, and a number of cycle features such as jumps, boardwalks and a snake run, as well as a mini playground, car parking and toilets.

Construction is due to start this week on the next stage which will include changing rooms, service connections, pathways, lighting, landscaping and the main carpark. This stage should be completed by April 2023.

Mr Millar says a special feature of the park will be the large areas of native planting for people to explore. The bike tracks will be linked to the existing rail trail cycle network, which runs along Birchs Road.