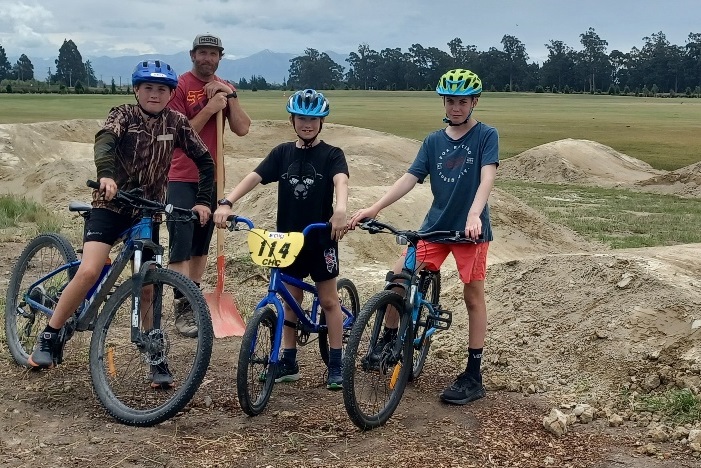 There was an early Christmas present for a young Kirwee resident who saw his appeal to Council come true.

Cameron Cridge, 12, presented his appeal for a pump track in Kirwee in October last year.

The Council kept working with Cameron on his proposal, including Cameron researching and providing a proposed design – which was used to make the final product as part of the ongoing upgrades to Kirwee Reserve.

On Friday 3 December, Cameron and his friends were invited to put bring their spades and rakes and help pump track builder Cameron Bisset to put the finishing touches to the final berm of that pump track – and get to take their first rides.

The clay track – roughly 30 metres by 20 metres – is designed for bike use only and will need annual maintenance. It is the start of the next stage of upgrades at the Kirwee Reserve, which will see a new playground installed and some further landscaping completed by March 2022.

Property Project Manager Sandrine Carrara says the project was a special one and it was really pleasing to be able to include Cameron in the development and building of the track.

“It was great to see the passion from Cameron and we were really pleased to be able to work with him and bring his dreams to reality. It was great fun to see the kids get to ride the track and to see how well used it was.”