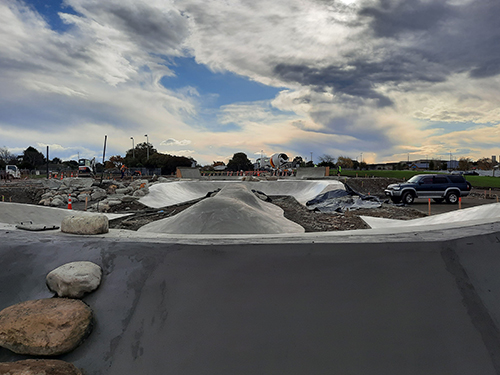 Work on the youth zone, which is being built by Isaac Construction, began in mid-March, and is scheduled for completion by the end of the year. The youth zone was designed with input from students at Selwyn’s four high schools.

It will feature a range of areas for people to hang out, a large ‘Eagle Claw’ basket swing, skate park, half basketball court and netball zone. There will also be a gaga ball pit – a game similar to dodge ball and played in a pit area, where players throw the ball with the aim to touch other players’ legs.

The skate park’s main features will include a pool bowl, flow bowl and snake run. Street skate features such as stairs, banks, rails and ledges have been integrated into various pathways to add to the lines users can ride. The skate features are being designed and constructed by skate park design and build specialist Nelson Creek Skateparks and Boards, led by experienced skateboarder David North. The company most recently built the West Melton skate area.

Nelson Creek has been able to create most of the skate features prior to winter setting in, with landscaping of the remaining hardscape area already in progress and ramping up in the next few weeks.

The project team and the Selwyn Youth Council have also begun gathering ideas for an opening event for the zone, which will likely feature a skate competition, gaga ball, food and a street art workshop, along with other fun activities.