Find out what driver distraction is and how it affects the driver and passengers.

Driver distraction is a very serious road safety issue in Canterbury, New Zealand and all around the world.

What is driver distraction? It is any action that takes your hands, eyes and mind off the task of driving.

There are three recognized categories of distraction.

Even if your phone is connected to Bluetooth, the call you are on takes your mind away from the driving tasks you come across.

Potentially the greatest distraction to happen to us these days comes from the touch screens in today's cars. We think it's okay, but they are a combination of manual, visual and cognitive distraction like no other. 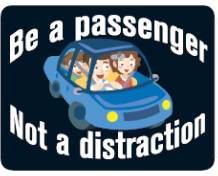 It is easy to underestimate how distracting passengers can be when a person is driving. But it is a serious matter, particularly for our younger drivers. Again, a combination of visual and cognitive distraction.

Several studies have shown the fatal crash risk for young drivers is higher if they have passengers in the car.

With two or more passengers, the risk is 10 times greater compared to driving alone. And the risk is at its greatest when the passengers are a similar age to the driver.

Passengers can distract drivers in many ways:

These examples are all common scenarios and are distractions that can affect a driver's ability to concentrate. We need passengers to recognise that they are part of the problem when it comes to driver distraction.

Our approach: We want passengers to consider their role in the car and to think about how their actions could distract a driver. By taking responsibility for their actions when travelling, they could prevent a driver from being distracted.

One of the most recognised distractions is using a cellphone while driving.

From 01 November 2009 it became illegal for drivers to use a hand-held mobile phone while driving. The road user rule states that drivers cannot use a mobile phone;

Breaching this ban incurs a fine of $80 and 20 demerit points. It is still evident that some drivers are still willing to take that risk. Of more concern is when a mobile phone is used while driving, it puts other road users at risk. This road safety issue is not only New Zealand wide but also across the rest of the world. UK and Australia have also banned the use of hand held phones.

Although this road user road rule came into effect several years ago, we all still see many drivers using hand held cellphones while driving. The most serious consequence to using a cellphone while driving is causing a crash. Crashes where driver attention has been diverted by a cellphone contributes to many people being killed or seriously injured in New Zealand every year.

If we consider the extremely high number of crashes where all other types of distraction are recorded, it is clear driver distraction is emerging as a very serious road safety concern in New Zealand.