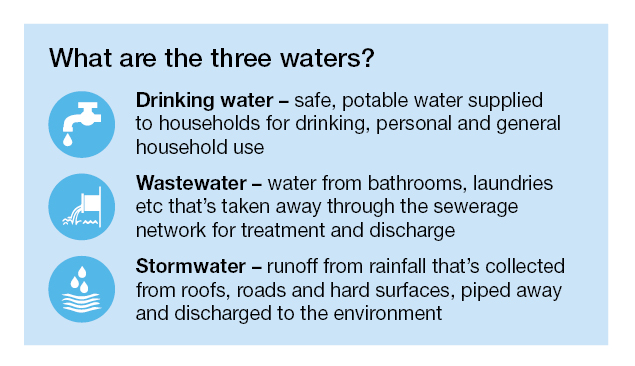 On Wednesday 27 October the Government announced it would introduce legislation in December 2021 that would see the reforms put in place by July 2024. It also removed the option for Councils to opt-out of the reforms.

The Council is extremely disappointed that the Government has made the decision to force councils to become part of their new Three Waters reform entities.

The Council entered into the reform process after the Government committed to giving councils a choice about opting in or out of any proposed new entity.

Based on that assurance, we committed to consult with our communities before making any decision – that opportunity has now been stripped away from us

The Government’s reforms will mean significant changes both for the Council and for residents, in the way that water services are managed in Selwyn.

On these pages you can find information about what the Government is proposing, what it might mean for Selwyn and what we are doing about it.

What is the Council doing now?

In anticipation of this decision the council has been working with other South Island councils and Ngāi Tahu to influence the Government’s proposed South Island entity to keep it focussed on local priorities.

The Government will now set up a set up three separate working groups to address the governance, representation and accountability elements of their reform model.

The Council will continue advocate strongly through this process to ensure Selwyn communities have access to safe, high quality water and wastewater services and that future improvements are continually delivered.

Selwyn's water networks are relatively new and well-maintained and the costs for our residents are some of the lowest in the country.

Ensuring Selwyn receives benefits through reform and doesn’t just pay twice to improve others’ systems on top of our own is an ongoing concern.

We continue to seek answers to the questions we raised in our formal response [PDF, 1874 KB] in September seeking more detail on how the new reforms would work and how the community will continue to have a say in the governance and accountability and are represented in the new entity managing our three waters services.

In our response we have asked a series of questions seeking more detail on the reform proposals and called for a pause in the reforms so we have the time and the full information to make an informed decision.

We’re asking for more information from Government – about things like

Timeline and next steps

With  the option for councils to opt in or out of the proposals having now been removed our focus will be on working with the working party set up to improve the governance, representation and accountability of the new entities to make sure that Selwyn residents will continue to have a say over their water services.