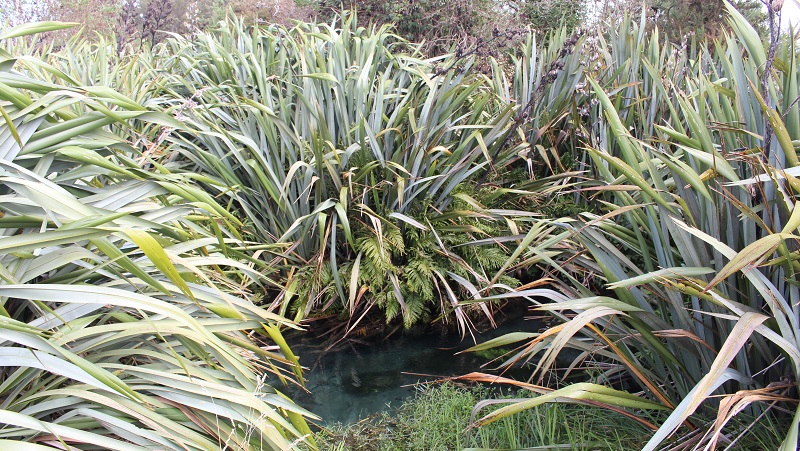 The Lee River and Hei Hei are streams fed from springs linked to the Rakaia River. Both of these streams flow through the Inwood’s Farm. The Hei Hei stream is bordered by cabbage trees Cordyline australis (some of the best relic trees on the lowland plains), tall flax (Phormium tenax), Carex secta and the native fern Blechnum minus and other native species. The vegetation overhangs the clear meandering stream giving a striking natural scene in the surrounding landscape. 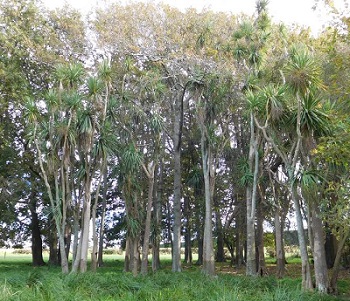 In 2018 an ecological assessment was carried out on the property with the permission of the landowners. This survey confirmed that there were significant ecological values on the Inwood’s Farm. The site is regarded as significant in part because it contains one of the few riparian flaxlands on natural landforms remaining on the Plains. Both spring fed streams provide a wildlife corridor down to the sea and the deep clear water provides habitat for fish and other wildlife. The threads of flax and cabbage trees provide food for native birds and insects, and may eventually help to encourage other native birds down onto the plains.

The 2018 survey showed the landowner’s careful management has been ideal for the continuing health of the waterways. The landowners have also been instrumental in the restoration and protection of the area by undertaking riparian planting and weed control.

The Crumpton’s property sits on old river channels of the Waimakariri River beside the Old West Coast road. The landowners were aware that they had interesting native vegetation on their land. As a result an ecological survey was carried out on the property in July 2007, and it was determined to be an SNA.

Paddocks on the property have not been cultivated or ploughed leaving the natural landforms of the river channels intact. These landforms tell a story of the role of the Waimakariri River in laying down the Canterbury Plains over time. The uncultivated paddocks have also retained an excellent example of the shrubland/grassland communities that were once widespread on the Plains but are now exceedingly rare. 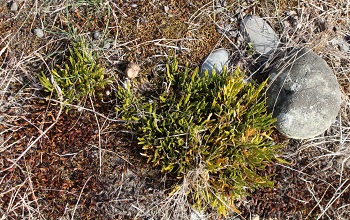 Six native plant species recorded on the site are now regarded as rare on the Canterbury Plains. One, Olearia adenocarpa is endemic to the Plains and has a current conservation status of Threatened-Nationally Critical (the threat ranking given to the plants at most risk of extinction in New Zealand). All of the native shrub species recorded are recognised in the Selwyn District Plan - as ‘regionally significant plants on the Canterbury Plains’.

Ian and Patricia have legally protected the site through a QEII Covenant. Their hands on care for and management of the site (no cultivation and occasional mowing in parts) has been the ideal maintenance for the dryland native vegetation communities that are present. Enabling natural regeneration by protecting the locally significant remnants of native plants that grow on this small area of uncultivated land will be a seed source in the future that will help keep the plant community alive.

The Crumptons have also protected the site by weed control and fencing off the rare species from browsing animals such as rabbits and hares.