A history of George Augustus Selwyn, after whom the district was named 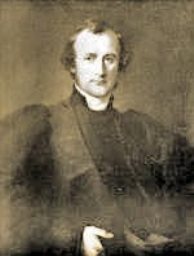 Born into a well-off family in Hampstead, London, on 5 April 1809, George was the fifth of eight children and the third to survive infancy. His parents were William and Letitia Selwyn (nee Kynaston). His father was a prominent constitutional lawyer who, among other things, advised Prince Albert.

As a schoolboy George excelled at both his studies and sport. Following in the footsteps of his elder brother, William, he became an Anglican priest after first studying at Eton (where he formed a lifelong friendship with William Gladstone, later the Prime Minister of Great Britain) and then at Cambridge (where he rowed in the inaugural Cambridge-Oxford boat race in 1829).

He was ordained in 1834 - a year overshadowed by the tragic death of his younger brother and fellow Eton-Cambridge graduate, Thomas. For a time he was appointed chaplain at Windsor Castle, giving Prince Albert the rare privilege of having members of the Selwyn Family counsel him in both spiritual and constitutional matters.

George's youngest brother, Charles, (later the Right Honourable Sir Charles) also went to Eton and Cambridge but, like their father, opted for law rather than theology. He later entered parliament as the MP for Cambridge University and eventually became England's Solicitor General, a privy councillor and Lord Justice of Appeal.

Anglican Bishop of the Pacific

In 1839, George married Sarah Richardson, daughter of Judge Sir John Richardson. Two years later, in 1841, the Archbishop of Canterbury elevated the 32 year old chaplain to a new role, as the first Anglican Bishop of the Pacific - a position which his brother William had earlier declined. Through a clerical error, Selwyn's diocese extended 34 degrees north of the equator (the appointment document should have read 34 degrees south).

Undaunted, Selwyn took up his post with enthusiasm. Before arriving in New Zealand he learned the Maori language well enough to preach in it as soon as he got here. He quickly established excellent relationships with the Maori population and even remained on good terms during the ten year war between some North Island tribes and European settlers, at various times providing medication and mediation to men on both sides.

Shortly after settling with his young wife at the Christian Missionary Society station in the Bay of Islands, Selwyn set off on the first of many long journeys and extended absences as he patrolled his parish. In 1843 and 1844 he travelled the length of New Zealand by horse, foot, boat and canoe, leaving in his wake a sprinkling of locations that now bear his name.

One story that survives of that first journey has been handed down by the Chaplin family, who were early settlers in the Auckland area. One day, while Mrs Chaplin was washing clothes outside in a galvanised tub, she heard a noise in the bush and a man emerged wearing a wide-brimmed hat and old clothes that had been snagged by bush lawyer vines. He politely asked if any children needed baptising. Taking him for a traveling Catholic priest she said, "I don't think Captain Tuohy will let you baptise his. He belongs to the Church of England."

"So do I," said Selwyn. "I'm the bishop." He duly baptised seven children and went on his way, fortified by a cup of tea from Mrs Chaplin.

He made many journeys throughout New Zealand, including the Chatham Islands and Stewart Island. He also sailed around Melanesia, having become a competent sailor and navigator of his schooner, the Undine, and later the larger Border Maid. He elected to deal only with "totally heathen isles" and not to evangelise wherever Christian missionaries had already established a presence, so as not to confuse the natives with denominational variation. This ruled out most of Polynesia as well as Fiji.

His Melanesian mission began in 1848 with a voyage of inspection in H.M.S. Dido. He realised that Christianity would only take root in these many scattered islands if a native clergy were trained. He decided to visit the islands each year and bring back promising candidates to be trained at the College of St John the Evangelist, a school which he had recently established near Auckland for the sons of the colonists and whose system of education combined agricultural labour and printing with theological study.

In August 1849, the 22-ton Undine, with a crew of four, no weapon of any sort, and no reliable charts, set out for the "cannibal" islands, shadowed for protection by the H.M.S. Havannah. The mission was a success. Several students were brought back and, over the next three years, similar trips were made in the larger Border Maid.

Unfortunately, several of the Melanesian students he brought back died and Selwyn concluded that the New Zealand climate was unsuitable for them. He sailed to England and successfully raised funds for the establishment of a mission and school on Norfolk Island and for the purchase of a larger mission boat, the Southern Cross.

From that point, the Melanesian mission began to bloom. One legacy of this was a sudden profusion of Island children being christened George and Sarah. One of these - baptised on Norfolk Island in 1857 - was George Augustus Selwyn Christian, a great grandson of Bounty mutineer, Fletcher Christian.

Back in New Zealand, Selwyn took his mission to all corners of the country and also relocated from the Bay of Islands. He purchased land in Parnell, Auckland, on which is built St Stephen's Chapel. He also purchased the parcel on which the Cathedral of the Holy Trinity complex stands and erected the historic and beautiful Bishops court on further landholdings.

His wife, Sarah, often left at home with two sons, found pursuits of her own. She worked with St Johns Theological College students to develop the reserve known as St John's Bush, planting oak trees and many species of natives, including a kauri and nearly 2,000 ngaio trees. Today it is a thriving reserve that has over 165 native plants, streams with native fish, more than 30 different spiders and several lizard species. Friends of St John's Bush has a very active membership which holds regular working bees to control weeds and pests. They aim to preserve the site in accordance with Sarah Selwyn's wishes.

The Selwyns stayed in New Zealand for 27 years until George finally bowed to pressure to take up the bishopric of Lichfield in England in 1868. Sarah was reportedly pleased to be home and they both lived contentedly until their deaths, he on 11 April 1878 and she 29 years later on 24 March 1907.