Indigenous flora and fauna of the Selwyn District

Indigenous biodiversity of the Selwyn District

The Selwyn District is home to many at risk and threatened native species both plant and animals.

New Zealand has five mudfish species all, except the Chatham Island mudfish, are found in swampy lowland habitats including wetlands, pools in swamp forests and slow flowing streams and drains.

Mudfish belong in the Galaxiidae family along with what is commonly known as whitebait. Like all galaxiids, mudfish are elongated fish that do not have scales. However mudfish differ from other galaxiids by having a no or reduced pelvic fin and a eel-like form. They vary in size between species but adults grow to around 9-12 cm long.

Mudfish have a special ability; they are able to survive for long periods when surface water drys out. They burrow into the soil and wait until surface water returns. However they do need damp surroundings and cover such as logs, tree roots and vegetation to keep them alive.

The Canterbury mudfish (kōwaro) are considered a taonga (treasured) species by Ngāi Tahu. Their populations have declined through habitat loss and degradation. They are now the most threatened of New Zealand's mudfish species with the conservation status of Threatened (Nationally Critical) under the NZ Threat Classification System.

Remaining populations are now highly fragmented surviving in a range of habitats including water races, roadside drains and farm ponds across the Canterbury Plains between the Ashley River (in the north) and the Waitaki River (in the south). Much of the species range lies within the Selwyn District. In early 2000 Anita Spencer Senior Ranger for the Department of Conservation conducted a Canterbury mudfish population survey. One landowner, contacted by Anita pointed to a wet area on his property were he thought mudfish might be. Traps were set in the wetland and 62 mudfish were caught. To improve the habitat DOC has helped to remove crack willow from the wetland. Measures are being taken to keep out trout, which predate on mudfish. The wetland hosts one of the largest populations of the endangered Canterbury mudfish. 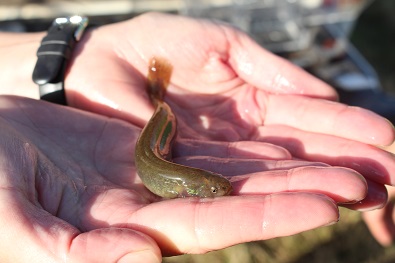 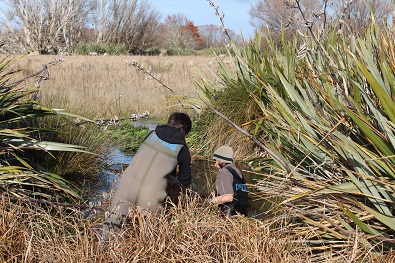 The Australasian bittern/matuku inhabits wetlands throughout New Zealand. The bird is also found in Australia and New Caledonia but populations in all three countries has declined and they are now classed globally as endangered. There is thought to be less than 1000 birds in New Zealand and their conservation status is Threatened-Nationally Critical. As with many other New Zealand birds they have suffered from habitat loss (over 90% of our wetlands have disappeared), predation and human disturbance.

Matuku are dependent on healthy wetlands and are a potential indicator of wetland health as they require rich food supplies and high quality and ecologically diverse habitat. Canterbury is one of the few strongholds for matuku in the country. Te Waihora / Lake Ellesmere is a significant site for bittern. The lake is a large body of shallow water with extensive reed beds and is rich in small fish and eels a favourite food source for the bird. There are suitable nesting habitats around the lake and much of its large margin is inaccessible to people meaning less disturbance to this shy bird.

Prior to 2014 very little was known about this cryptic birds ecology, cause of decline and how to manage their populations. The Department of Conservation is now actively monitoring bird populations around the Lake and other areas in Canterbury. Predator control has been established at Harts Creek, Halswell River mouth, Lakeside reserve and Yarrs Flat. Management tools are being developed which includes methods for controlling weeds and predators, managing water levels and quality, and restoring wetland vegetation and food supplies for bitterns. 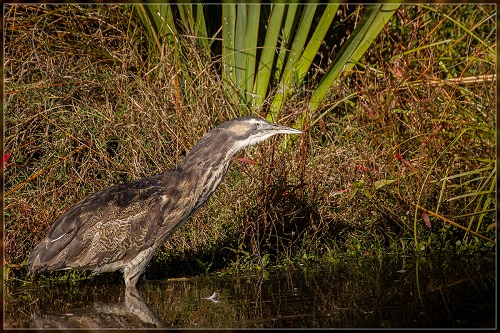 There are two types of eel in New Zealand; the shortfin and the longfin. The Māori word for eels is Tuna, they are a taonga (treasured) species to Rūnanga. Tuna were relied upon as a source of food and are considered kaitiaki (guardians) of streams rivers and lakes.

The longfin eel is one of the largest eels in the world and is endemic to New Zealand. It lives in our rivers and lakes; habitat loss, commercial fishing, pollution in waterways have all had an impact on their numbers. They have a conservation status of At risk, declining. Eels are a type of fish so therefore have scales and fins. The Longfin eel has its top (dorsal) fin much longer than its bottom fin which distinguishes it from the short fin eel where both fins are of similar length.

The adult eel lives in freshwater bodies and when reaching breeding age (they can live to over 80 years of age) they migrate out to sea to spawn and die. The exact location of spawning is unknown but is thought to be near Tonga. Elvers (young eels) of these magnificent creatures make their way from the sea up streams and rivers to find suitable habitat in which to live. They are able to overcome natural barriers such as waterfalls but man made structures such as dams can restrict their migration.

Swamp nettle also known as creeping nettle is one of a number of endemic nettles in the Urtica family. As the name suggests it grows in wet areas, and is generally found on lake margins and fertile to semi fertile wetlands. 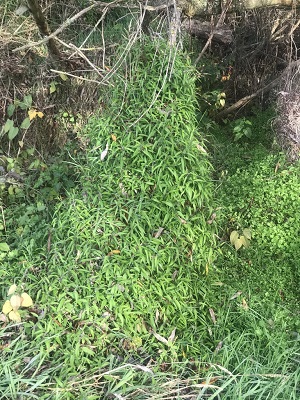 It can be found growing at the base of Carex secta, amongst flax and up willow species such as grey and cracked. The plant has stems that can reach up to 2m tall and has narrow leaves. The leaf stalks and leaves are sparsely clad with stinging hairs which can inflict a painful sting when touched. The nettle is classed as At Risk declining because of wetland clearance, drainage and competition from weeds. Swamp nettle along with ongaonga (tree nettle) are important hosts plants for the endemic red and native yellow admiral butterflies. The butterflies only lay their eggs on 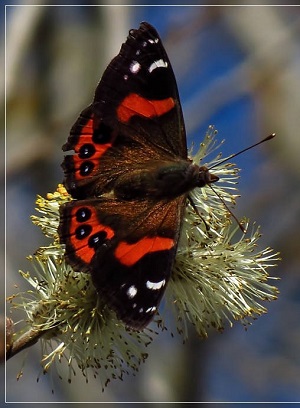 nettle plants and the caterpillars live on and eat the nettle before they change into a chrysalis and then a butterfly. Admiral butterfly numbers, especially the endemic red, have declined through the loss of their host plants.

Urtica perconfusa grows around the fresh water wetland margins of Te Waihora/Lake Ellesmere. It can be seen at Yarrs Flat Wildlife Reserve growing amongst the C. secta and up willow trees.

Characteristic of the Canterbury high country is a greyish thorny shrub know as Matagouri (Discaria toumatou). Matagouri is a plant that is endemic to New Zealand and is the only one with thorns. The plants growth habit is mainly as a shrub however it can grow to a small tree up to 5 m tall. Matagouri is very slow growing and can live up to 100 years or more. Its small leaves are produced in spring but the shrub is often leafless at other times of the year. The flowers are tiny and white giving off a pleasant sweet smell.

Matagouri is most common in tussock grasslands, terraces, stony areas and river beds.  It can be the sole component of shrublands or categorised as ‘grey scrub’ with other significant native species including Coprosma propinqua, Melicytus alpinus and Carmichaelia species (native broom). 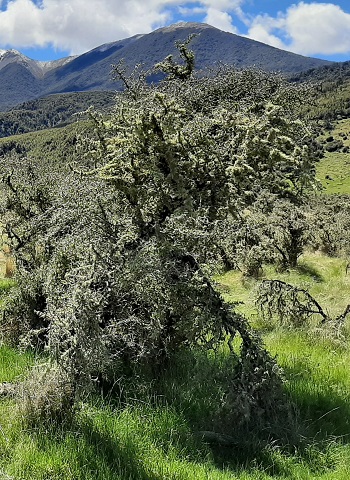 Like other Discaria species Matagouri fixes nitrogen from the atmosphere via a symbiotic relationship with bacteria which are contained in the plants root nodules. This ability to fix nitrogen means that it can live in relatively nutrient poor soils and as parts of the plant decay (leaves, twigs, roots) they add litter to the soil which other plants can obtain their nitrogen from. Native scrub such as matagouri provides important shelter, nectar and habitat for insects, lizards and birds. Matagouri is the host plant for Acroclita discariana, an endemic moth which is classified as Nationally Vulnerable.

Fire, heavy sheep and rabbit browsing, and cultivation has greatly reduced areas of Matagouri and other vegetation associated with it. It has been, and still is, seen by many South Island hill country farmers as a weed and is regularly burned or poisoned to create and maintain pasture and stock access ways.

The current conservation status of Matagouri is At Risk – Declining. The Selwyn District Plan contains rules (under Rural Version, 9.21 Activities and clearance of indigenous vegetation and indigenous plant species) that protect Matagouri, and other native species and habitats. Please contact SDC biodiversity staff (biodiversity@selwyn.govt.nz) for more information in this regard.