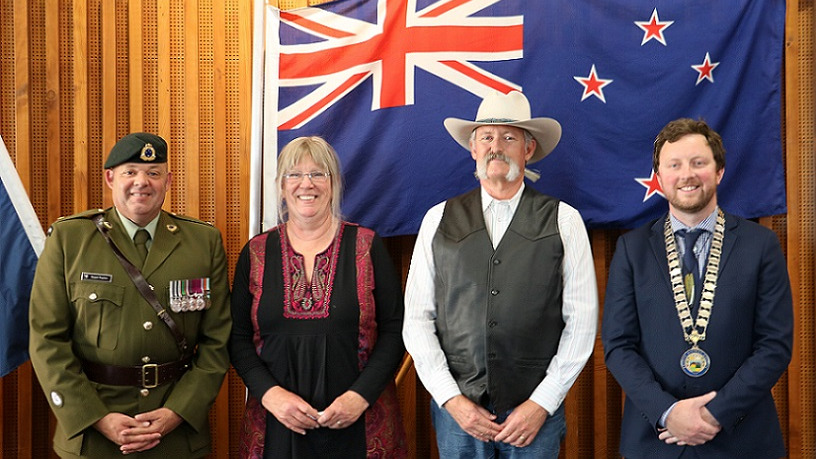 There was a festive atmosphere amid the celebrations for the final citizenship ceremony of the year.

A group of 29 people from 11 different nationalities took the oath of allegiance to become New Zealanders. They included new citizens originally from Russia, Chile, Nigeria, Cambodia and the United States of America.

In a festive touch, Mayor Sam Broughton broke out his guitar  for the singing of the national anthem, before leading the group  in two Christmas Carols, Silent Night and Feliz Navidad, to round out the evening.

Several of the new citizens spoke of searching the world before choosing New Zealand as a place to settle. Thomas Lowton said he and his family were touring the world after he retired from the British Army in 2012. “We landed in New Zealand and we didn’t want to leave anymore,” he said.

Montana farmer and engineer CJ Johansson said he and his wife were also searching the world for a place to make a new start after he lost his job. “We were looking for a place at least as nice as Montana. We found New Zealand and it turned out we were right, it’s at least as nice and we’re very happy living here and becoming citizens.”

Many of the group noted the warm welcome they had received from their new country when they moved here, including eight year old Megan Nelson, originally from South Africa. “Thank you for welcoming us and letting us become New Zealanders. Thank you,” she said.

It was the first ceremony back at the Council offices in Rolleston after five months away with ceremonies at West Melton Community and Recreation Centre and Tai Tapu Community Centre while work was done on the Rolleston building.