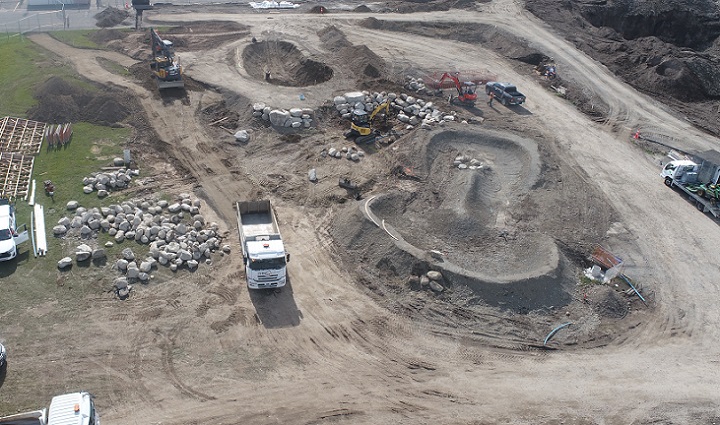 Another exciting new hub for youth in the district is being built in the next stage of the Rolleston Town Centre.

Work on the youth zone, which is being built by Isaac Construction, began in mid-March, and aims to be completed by the end of the year. The area will feature a skate park, half basketball court and netball zone. There will also be a gaga ball pit – a game similar to dodge ball and played in a pit area, where players throw the ball with the aim to touch other players’ legs.

There will also be an eagle claw basket swing and outdoor furniture along with hangout zones. The skate park will include a pool bowl, flow bowl and snake run and will be built by skate park design and build specialist Nelson Creek Skateboards, led by experienced skateboarder David North. The company most recently built the West Melton skate area.
The youth zone was designed with input from students at Selwyn’s four high schools. It will add another vibrant and different space to the town centre, Council Acting Major Projects Manager Phil Millar says.
“Our aim with the town centre area is to make this a space for all Selwyn residents, with something for everyone. The youth zone will be a fun space designed with the help of Selwyn youth to be somewhere that is theirs to enjoy alongside all the other areas the town centre has to offer.”

Due to this construction, access to the tennis and netball courts on Rolleston Reserve will only be via the main reserve car park north of Te Ara Ātea for the next six weeks. Access from the Wordsworth Street extension should be restored after this. Signage will be in place to direct people on how to safely access the courts.