Local elections – do you know what ward you’re in? 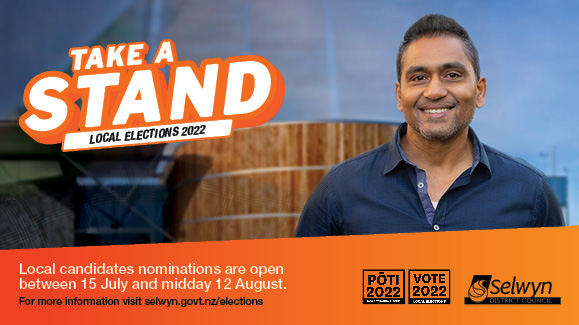 Selwyn voters at the upcoming local elections are being encouraged to familiarise themselves with new ward boundaries – as most of them have changed.

Unprecedented population growth has resulted in a new Rolleston Ward replacing the former Selwyn Central, with three councillors instead of the current four.

All other wards keep the same representation, but West Melton is now part of the Malvern Ward, while an area between Burnham and Rolleston moves to the Ellesmere Ward. The Malvern Community Board keeps five members elected from the Hawkins and Tawera subdivisions, plus a new subdivision covering West Melton.

The total number of councillors drops from 11 to 10, elected from the four wards, with the mayor to be elected across the entire district. Nominations for Council, Community Board and Mayor opened on Friday and close at midday on Friday 12 August. Voting packs will go out the following month, with postal voting open from 16 September to election day, Saturday 8 October.

To check what ward you are in, see our maps online at selwyn.govt.nz/elections – including an interactive map where you can enter your address and see the ward it’s in.

Our web page is also the place to keep up to date with the latest elections information – including a list of confirmed candidates which will be regularly updated through the nominations period.