Another salute to Selwyn’s past has been added to the streets around the cenotaph at Leeston.

As part of the Poppy Places campaign, a poppy has been added to the signs for Gallipoli Street and Messines Street, which border the township’s landmark cenotaph. 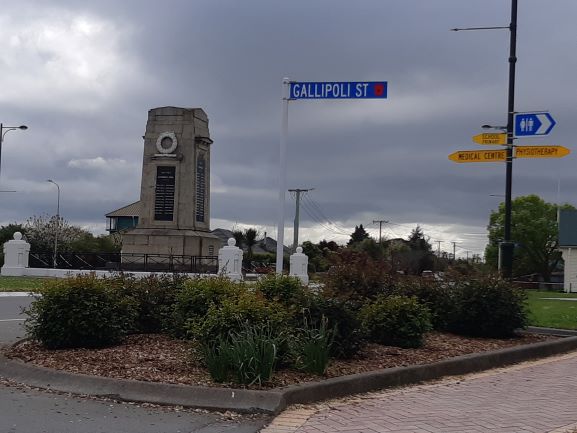 Both streets trace their origins to the Leeston war memorial, erected in 1924 to commemorate soldiers from Ellesmere County who lost their lives during the First World War.

Many Territorial soldiers from the Ellesmere area volunteered to serve in the New Zealand Expeditionary Force when it was established at the outbreak of the First World War in August 1914.

It was these initial volunteers, and those who followed in the reinforcement contingents in 1915, who fought during the Gallipoli campaign.

The battle of Messines in June 1917 was one of the NZ Division’s greatest successes on the Western Front, in that it achieved all of its objectives in the attack battle plan.

However, the division sustained 3,700 casualties, including 700 killed. Most likely there would have been soldiers from Ellesmere County involved.

Council Asset Engineer Transportation, Mark Chamberlain, says the historic value of the poppy, street name and location made the addition an easy decision. “As a growing district it is important to remember the people who have come before us and the sacrifices they made. There are a number of families still in the Ellesmere area who would have had family members fight in the First World War, and this gesture is about helping to maintain the knowledge of what our forefathers went through.”

The cenotaph and the naming of Gallipoli Street and Messines Street have provided the people of the district with a permanent focal point to remember and commemorate the sacrifice members of their community made during the campaign.

Information on the Poppy Places Trust can be found on their website – poppyplaces.nz – with information on Gallipoli Street, Messines Street and the other sites around New Zealand.