Welcome to the family at citizenship ceremony 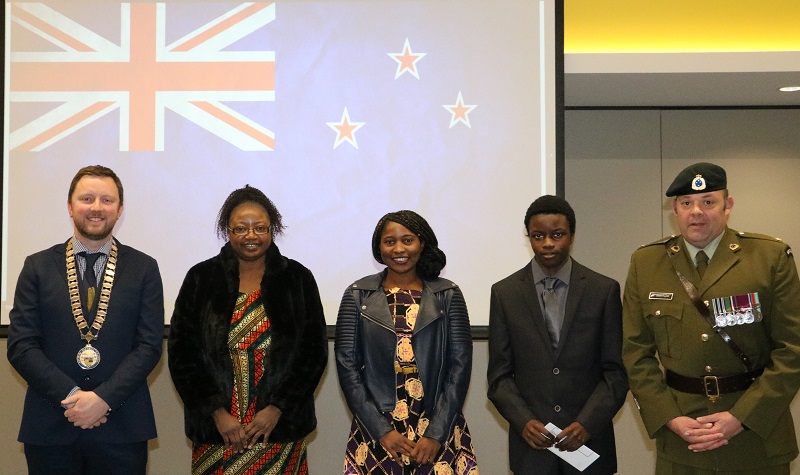 There was a family atmosphere as new New Zealanders were welcomed at Selwyn’s latest monthly citizenship ceremony.

The 19 new citizens from 10 different countries received their citizenship in the ceremony at Tai Tapu Community Centre.

The West Rolleston Primary School Choir opened the evening with renditions of Crowded House’s ‘Don’t Dream it’s Over’ and the new Selwyn district waiata and later led the group in the national anthem Many of the new citizens came as family groups with grandparents, parents and soon-to-be parents among the mix.

For Dorothy Chilwalo, originally from Zambia, it was a proud moment to become a New Zealander together with her children Angela Yendama – a youth worker, newly graduated from the University of Canterbury – and Chinjila Lunda, a year 13 student. “I could have taken it a long time ago, but I was waiting for these guys to grow up and make their own decisions to become New Zealanders.”

After moving from Scotland in 2007 with her two young children to escape the cold and on the recommendation of friends, the registered nurse says she fell in love with New Zealand. “Its home. We loved the place, we loved the people, the culture.”

For Australian Richard Fowler encouragement from his wife helped with the decision that it was time, after 50 years of ‘enjoying the fabulous opportunities this country offers,’ to officially become a New Zealander, while for British couple Peter and Alison Cain it was a desire to join their young Kiwi born daughter as citizens of her homeland.

Bidhan Chapagai from Bhutan, who moved to New Zealand four years ago, received rousing applause when he told the room it was “a true honour and a privilege to be a New Zealand citizen.”