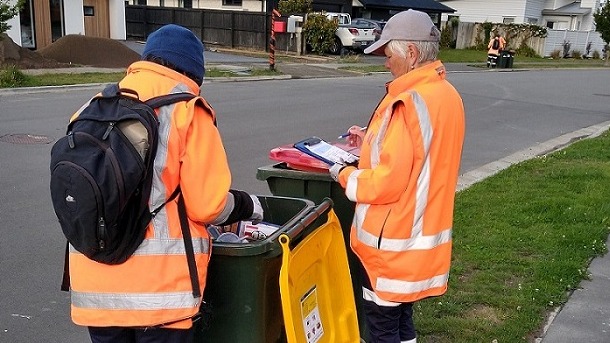 Selwyn residents have been making a big effort to recycle correctly over the past three months.

Just one truck of recycling has been rejected since the Council’s contamination crew began bin inspections and guidance on improving recycling in December – compared to an average of six truck loads a month in the preceding six months, Council Solid Waste Manager Andrew Boyd says.

“It’s been really good to see the way people have made the effort to help get it right and avoid sending unnecessary waste to landfill. We know Selwyn residents care and it’s been pleasing to see how these reminders and a bit of extra vigilance from people have helped. We hope people will keep up the habits they’ve got into over the past few months.”

The Council provided households with updated bin stickers and magnetic easy recycling guides, and ran newspaper and social media advertising to support good recycling, before the contamination crew began its work, but it was noticeable how much things improved once the crew began its work, Andrew says.

“We’re really grateful to the crew, a small group of four who’ve pounded the streets in all weathers, doing a job that was at times unpopular. They’ve made a real difference to help recycling get to the right place and helping us all do it right.”

The crew added tags to bins with minor issues, advising people of the items in their recycling bin that could not be recycled. The most common reasons people received advice tags was for soft plastics (any plastic that can be crumpled in your hand), lids and Tetra Pak cartons such as common plant milk and non-plastic juice containers.

In the worst cases, badly contaminated bins were not collected. From December to February a total of 657 bins, fewer than 5% of those inspected, were rejected. These were mainly turned down for unacceptable contamination from items such as food, clothing, nappies and sanitary pads, which would have seen recycling loads contaminated and have to be sent to landfill.