Significant wetland to be restored with new funding 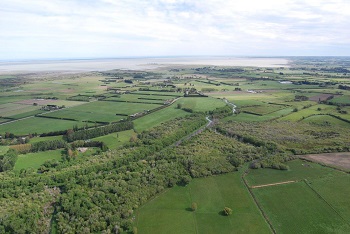 The Selwyn District Council is welcoming a huge boost from the Government to restore one of the most significant wetlands in Canterbury.

The four and a half year project to restore the 81 hectare Tārerekautuku/Yarrs Lagoon has received $796,980 in funding from the Ministry for the Environment’s Freshwater Improvement Fund. This funding is part of the Government’s Jobs for Nature programme.

Tārerekautuku is one of the largest freshwater wetlands in lowland Canterbury. The wetland near Lincoln is a significant part of the ecology of Te Waihora/Lake Ellesmere and its catchment, with the Ararira/LII River flowing through it to the lake. Formerly an open water body surrounded by low-lying swamp land, drainage practices and land clearance resulted in the lowering of the water table, transforming it to swamp and marsh habitat. Tārerekautuku was a key mahinga kai site for Ngāi Tahu.

The wetland is a significant area of native biodiversity, supporting a range of indigenous wetland plants including locally uncommon species. It also provides habitat for native birds, lizards and invertebrates.

Recognising the wetland’s significant value, the Council helped initiate a local community Wetland Care Group in 2018, together developing a reserve management plan and giving motivation to the site’s restoration.

The project will focus on the removal of willows and weeds, predator trapping and native plantings to restore lost values.

“This will bring back a taonga for Waikirikiri Selwyn, but it’s huge for the whole region. The wetland helps improve the water quality flowing into Te Waihora, and the project will restore a habitat that’s now rare on the lowland Canterbury Plains. We’re creating an oasis for native plants and animal life, and giving life back to a significant mahinga kai. There’s also considerable potential to allow for recreational usage in the future – including walking, kayaking, boating and bird watching.”

This project is being carried out in partnership with the Tārerekautuku Yarrs Lagoon Landcare Group, Department of Conservation, Living Water (partnership between Fonterra and DOC) and Environment Canterbury, and is supported by Te Taumutu Rūnanga.

“A wide range of native species and resources were once found at Tārerekautuku, which were used to sustain our tīpuna – our ancestors. The name Tārerekautuku refers to the swinging legs of the Australasian bittern, which suggests this wetland was once a stronghold for this globally endangered manu.

“We hope the restoration of Tārerekautuku, and predator control, will see bittern and other native species return to thrive here once again, as we work in partnership with the Crown to restore the mana and mauri of Te Waihora.”

Tārerekautuku wetland project is also supported by the Te Waihora Co-Governance group (a partnership of Ngāi Tahu, Environment Canterbury, Selwyn District Council, Christchurch City Council and the Department of Conservation). This partnership seeks the restoration of 3,500ha of wetlands around Te Waihora and the lake itself.

More information on the Tārerekautuku wetland.