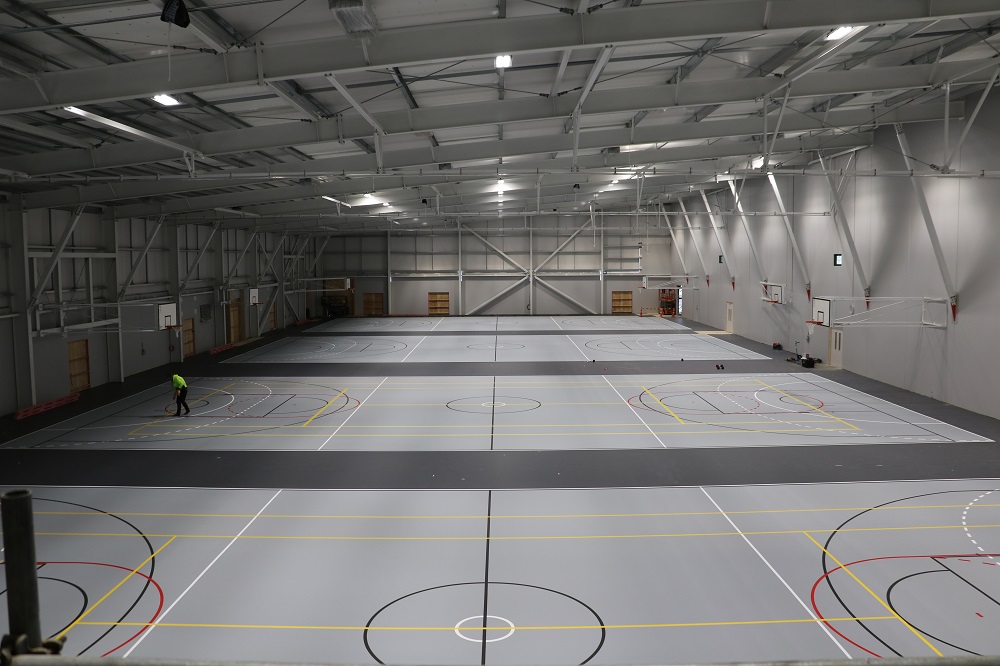 The first courts have been completed at the Selwyn Sports Centre.

The four poured polyurethane courts (similar to many school gyms) have been laid and the lines painted on last week as the building continues on track to open for the 2021 winter sports season.

The courts will be a multi-use space, with the markings set up for basketball, netball, futsal, tennis, korfball, floorball and a host of other sports, while the surface will also allow the space to be used for exhibitions and events. This hall will also host an interactive sports and educational wall.

Selwyn Netball has also agreed with the Council that it will use the centre for the 2021 winter season and beyond. Selwyn Netball Centre President Andrea James confirmed it will use the centre for its year 1 to 4 programme and its Saturday competition will be split between the Selwyn Sports Centre and the court facilities in Lincoln. In addition, a community indoor netball competition open to the wider Selwyn community will be held at the Selwyn Sports Centre.

The centre will have a focus on serving the community, including clubs and schools, and will feature two halls with four courts each, divided by a central corridor space.

In addition to the poured polyurethane courts, the John F. Reid Courts on the other side of the building will host four courts with a sprung wood floor, which is currently being laid. This hall will have courts for basketball, netball, futsal, volleyball and badminton, while a mezzanine around the top of the hall will feature a 240 metre walking track.

The building features insulated Kingspan panelling, which provides both high quality insulation and removes the need for internal cladding. It will also have solar panels that will generate up to 80 percent of its expected power consumption during summer.