Artificial turfs to take sport to next level 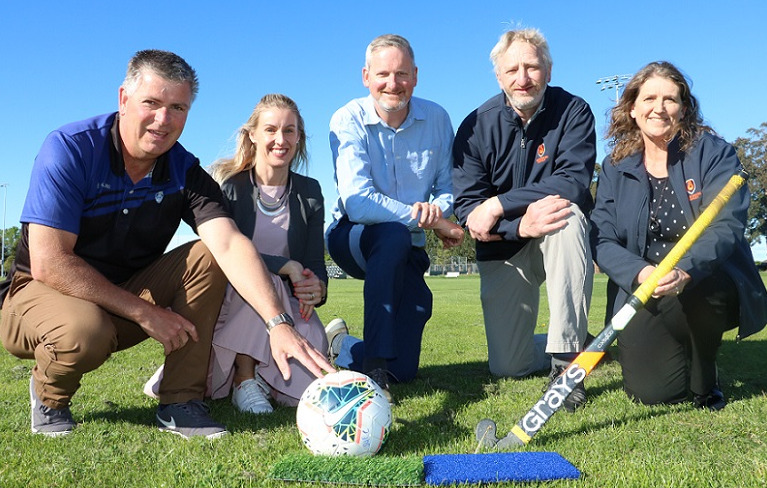 Two new artificial sports fields will be built at Foster Park, in Selwyn, to support sport in the district year-round.

The Council has awarded a contract to Polytan to install an artificial football turf and an artificial hockey turf as agreed in the 2021-2031 Long-Term Plan.

The pitches will be built to a standard to host national and international level matches, adjacent to the Selwyn Sports Centre and will be open for the 2022 winter sports season.

The pitches will cost $4.2million to build and the ongoing maintenance of the turfs and future turf replacements will be funded through a pitch hire fee and the recreational reserve rate.

Waikirikiri Hockey Club and Selwyn United Football Club will be the primary users of the pitches, along with the respective regional bodies. The turfs will be used to host competition matches and tournaments, and will also be available for hire to general users.

The pitches will allow both clubs to continue to grow and expand on the high standards and success they have had in recent years, and will help take sport in the district to the next level, Council Property Group Manager Douglas Marshall says.

“This is a really exciting step for sport in Selwyn. These are latest technology, high-quality pitches that will be the envy of other areas. They will be able to be used year-round by all levels of sport, which really helps to attract sport, support our clubs to keep excelling and gives more options for people to get active and have fun in Selwyn.”

The turf will be in addition to the sand-based half-turf, built in 2017 with Council support.  The half-turf has allowed the club to develop a strong junior membership.  However, the lack of a full-sized turf has hampered efforts to start a senior club and for hockey to grow further in the district.

Waikirikiri Hockey Club, which was founded in 2017, is a rapidly growing club and was named the best hockey club in the country last year. Club President Paul Wilson says the turf is an exciting development to help the club reach its goal of having teams in all grades by 2026.

“It’s a huge step for hockey in Waikirikiri Selwyn. It gives us the opportunity to grow into all age grades, not just juniors. It means our hockey players here in the district can train and play closer to home and for us to bring competitions to the district. It also means we can run development programmes, which we’re currently not able to do, and bring in and work with schools in the district.”

An artificial football turf was agreed as part of the 2021-2031 Long-Term Plan after discussions with Selwyn United. Selwyn United FC is one of the South Island’s largest football clubs with 1,200 members and the turf will be a big boost to the club, President Stan de Rooy says.

“Selwyn United FC has always been proud of its facilities throughout the district, and is excited to have a latest generation environmentally responsible all-weather turf added to Foster Park.

“An important prerequisite for SUFC was a turf suitable for all our members. The FIFA Pro quality turf not only provides for our top South Island/National League team; but with multi-field markings it will also be used right through to our youngest juniors.”

The new facility will take some pressure of the grass fields, which the club manages together with Council staff, Mr de Rooy says. With the ability to use in wet weather and without the need for the same rest periods the artificial turf will allow the equivalent training and playing time as five grass pitches, he says.

As part of the contract, the Council has selected a more environmentally friendly turf infill option for the Football turf that is industry-leading and will reduce the odour, heat and potential health risks found from using traditional SBR rubber infill.