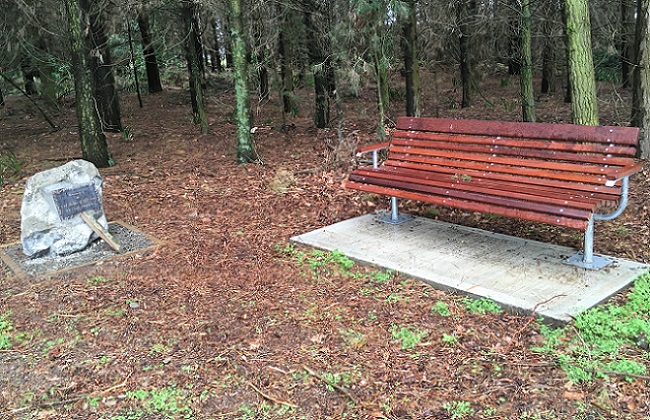 A memorial to some precious Selwyn children will be unveiled by the Council in December.

A memorial seat and plaque have been installed at Ellesmere Cemetery in Leeston, to mark a previously unmarked area where stillborn babies were buried in the 1950s and 1960s.

Mayor Sam Broughton will unveil the seat and plaque at a ceremony on Saturday 11 December.

The burials in the unmarked area were reported at the start of the year to the Ellesmere Echo Newspaper, which contacted the Council about them. Research by Council staff was able to confirm the story and the Council immediately took steps to recognise the burials.

The story was shared by Bob Croy, who grew up in a house on the cemetery grounds in the 1950s and 1960s. His father, Gordon, was the sexton – in charge of looking after the cemetery grounds – and told him how he and the local undertaker at the time, Jack Bryce, were burying stillborn babies to ensure they had a peaceful place to rest, despite the social taboo at the time.

Mr Croy was hopeful that a memorial could be set up and Council Reserves Manager Jonathan Crawford says the Council was grateful to be able to help with this special task.

“When we heard about this we felt it was a very appropriate and important thing to do. Our staff put in many hours to confirm the site and helping to ensure there is a fitting memorial. Burying these babies was an act of respect to them and their families at the time, and we wanted to show the same care to these families.”

Mayor Sam Broughton says it is a special opportunity. “Our cemeteries are a place for our communities to remember their loved and cherished family and friends. These lives were precious, and offering a place for them to be remembered is important. This memorial space now provides that opportunity and reflects the dignity that Gordon Croy and Jack Bryce sought to give those lives and their families who bore such grief.”